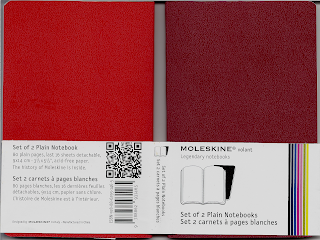 Moleskine Volant Pocketsize Notebook
A couple of weeks ago, I won a Haiku Contest (go to European Paper's Facebook page or go to their blog to read all the wonderful Haikus that were submitted).  The prize package I won included a large Moleskine Squared Journal, a Moleskine Wine Passions Journal, and a two pack of Moleskine Volant Plain Notebooks.

Look and Feel:
The coated cardboard covers are very plain—no wording except for the Moleskine name embossed on the back.  You can see a faint pebbly texture but the feel is smooth, and a bit waxy.  I ran a fingernail along a corner.  If the light hits just right, it shows, but it isn’t very noticeable.  I think these covers would hold up well to the jostling and dings that it would get in a purse.

The cream-colored paper is smooth but not slick.  As with most pocket-type notebooks, it's thin and may get folds (I'd be careful erasing) but won't tear easily.
Performance:
Stamping: 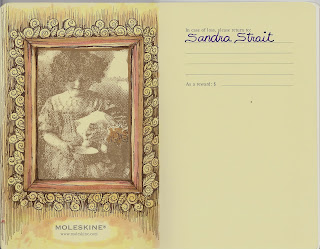 Earlier this week I posted a stamped image that I framed with a tangle- Girl Feeding Cat Item 16149 Plate 1285.  When I opened my Volant, wondering how to start testing, it struck me that this stamp would be really nice for customizing the inside (or the outside in some cases) of a notebook/journal.  I wasn’t sure how the cardboard would accept stamping ink, but decided to go for it.  I like it!   It shows the underlying texture of the cardboard, but that suits the vintage look.  The cover isn’t the same as the paper within, so I grabbed up some of the other new VLVS stamps I received recently, and stamped them up. 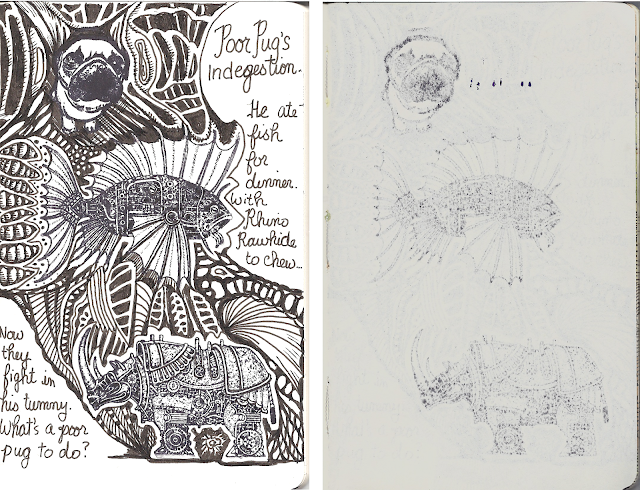 It occurred to me, that I’ve never done a black & white page with my stamps so I decided to go that route.  I used ‘Pug Looking Up’ with a ‘Steampunk Fish’ and ‘Steampunk Rhino’, and immediately wondered how these three could possibly go together.  That led to ‘Poor Pug’s Indigestion’.
The stamp ink (Memories Black Dye Ink) did bleed through to the back.  I was using a Faber-Castell’s Artist pen for the tangles, and though you can’t see it well in the scan, there was some shadowing with it as well.
The Faber-Castell artist pen lines were crisp, with no feathering.
Ball-Point Pen:
I spilled coffee on the page I did using a Bic pen, and a Pentel RSVP, but the ink went down smoothly with sharp lines.  There was shadowing on the back, but it wasn’t as noticeable.  I wouldn’t find it a problem.  This paper likes the ball-point pen! Colored Pencil:
I drew my tangles first, using a Micron Pigma.  The lines were sharp, with no feathering, but the shadows showed through on the back, even though the color pencil.
With soft Lyra Rembrandts I was able to get 3 or 4 layers down and blend colors without problem.  I wouldn’t recommend using hard leads or cheap color pencils, because it did take some work getting a good saturation of color.  There was some shadowing of the color on the back, but mostly it was the tangles that shadowed. 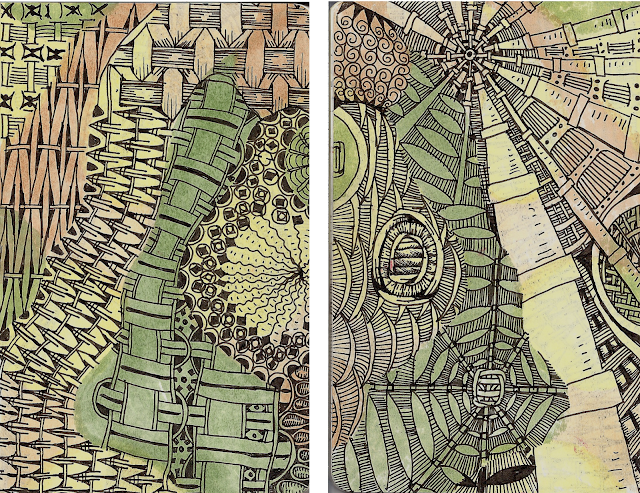 Alcohol Markers: I used Copics for this test.  The color is good, though not bright and there is almost 100% bleed-through.  Great for bleedthrumanades (got lemons? Make lemonade.  Got marker bleed-thru?  Make bleedthrumanades).  I did slip a piece of cardboard under my page before starting or the bleed-through would have gone through to the next page and possibly beyond (very normal for most paper!). 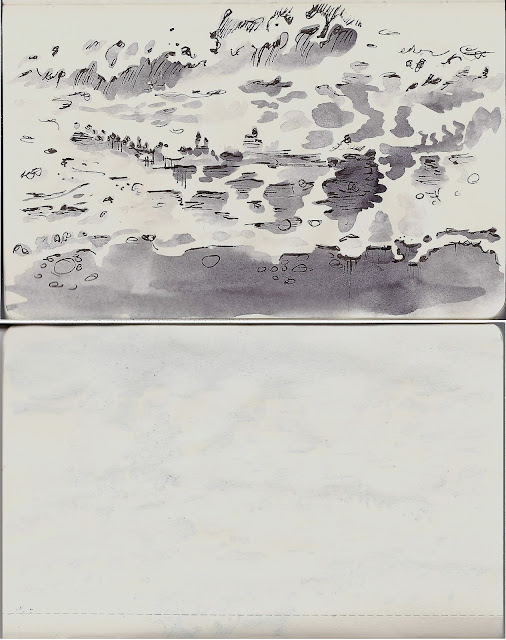 Watercolors:  I used Peerless Pearl Gray for this test.  My husband was on vacation last week, and we managed to get a couple of nights at the coast.  The weather was decidedly stormy, and the water was gray, gray, gray.  Not a hint of color.  The Pearl Gray was a perfect match for painting this sketch of  the ocean waves crashing on the sand.
You don’t need much water for the Peerless paints but given the shadows and bleed-through I’d encountered with other media, I didn’t expect the paper to handle water very well.  Surprise! There was very little shadowing, no bleed-through and no curl, even where the paper was wettest.  There was some light dimpling, which was to be expected because I only painted some parts of the page.  Weighting the note book down overnight eliminated most of the dimples. 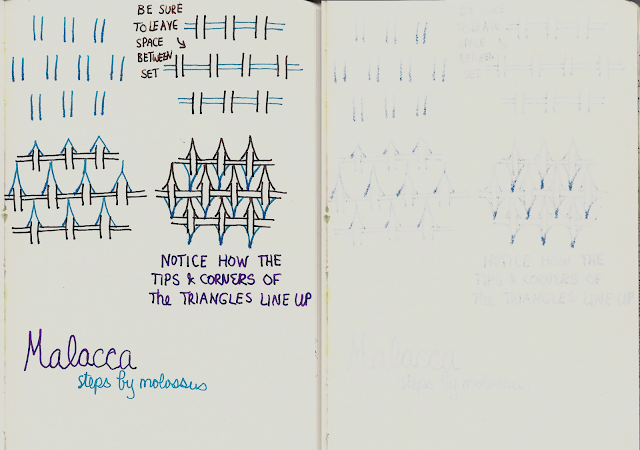 Fountain Pen:  I decided to use my fountain pens to draw up a tangle pattern.  I wasn’t expecting too much and this time I wasn’t surprised.  It actually didn’t do too poorly—there was some bleed-through on the downstroke, and some shadowing, but nothing went on to the next page.  Fountain pen inks vary considerably so some will bleed through more than others.
A word on the pattern.  It has a lot in common with CZT® Mary Elizabeth Martin’s Laced tangle pattern.  I wouldn’t call Malacca a tangleation, because it uses some mirroring and is meant to be a fill, where Laced rambles across the page as a border or string.   Laced uses circles and lines where Malacca uses lines and triangles.  But, by and large, there isn’t a whole lot of difference in the way the patterns are put together.  I recommend taking a look at Mary Elizabeth’s pattern.  It shows you how little it takes to turn one pattern into something entirely different.
Pros & Cons:
Cons:
A minor dislike-even though the paper in the Volant  notebook has a sewn binding, the cover is glued on.  That means the first and last pages are also glued at the inside edge, making them hard to work on.
More significant is the bleed-through and shadowing.  It wouldn’t stop me from buying another Volant in the future, but I’d have a specific use for it in mind.
There isn’t an elastic wrap to keep the notebook shut.  Not too much of a problem if it’s carried in pockets, but the pages could get mangled in a purse.
The last 6 pages are detachable.  I’ll have to add this as a ‘Pro’ item too, lol!  I don’t like to pull pages out of my notebooks, and feel it just makes them more likely to tear.
Pros:
The last 6 pages are detachable.  I know some people like to tear out pages to store elsewhere or to remove art/writing that they don’t like.
The paper handles watercolor far better than I expected, and I will probably use one of mine for quick watercolor sketches that can be used later for reference.
The notebook is light but sturdy.
The paper is pleasant to draw on and both art pens of the Micron type or the common ball-point pen work well making this a good notebook for doodling, Zentangling or writing, though you might end working only on one side of the paper.
Besides using one for watercolors, I plan to ‘pre-stamp’ one of them.  I enjoyed coming up with a story for my poor pug, and I plan to stamp up one of the Volant’s ahead of time.  Then I’ll carry it around in my purse, and when I’m waiting, I can relax with tangling, but I’ll also have fun coming up with little stories for the images.  I think this would be great fun to have when traveling with kids (which I’ll be doing soon), and, as anyone who knows me knows—I never entered second childhood because I refuse to leave the first, lol!
Once again, I want to thank European Paper for this fabulous prize!

Look for a review on the Wine Passions Moleskine in the next week or so.