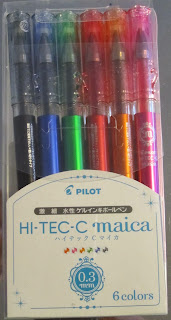 The Hi-Tec-C is one of those pens I've always meant to try out, and never have for some reason.  I've heard good things about them so I was very excited to have the chance to review the new Maica version.

The Maica version has the same ink but comes in a fancier barrel.  I always prefer performance over pretty, but performance and pretty is the best.  Does this pen have both?  Read on to find out!

The Maica's body is round with a metallic body color and clear plastic cap.  Both cap and body are color-coordinated to indicate ink color.  It is decorated with a letter 'M' logo and the name of the pen.

The Maica's cap is described as jewel-like, and it is multi-faceted.  The tinted color does sparkle somewhat if you hold it up to the light, but it's reasonably subtle.

Rather than a clip the cap has a loop.  The marketing text describes as a keychain loop, and even suggests adding charms to it.  I wouldn't want to do that, but I did find that the loop does a good job of keeping the pen from rolling. I think it does so better than a clip would.

If you are someone who uses a clip to carry the pen in your pocket or attach it to a folder or book, then you won't like the loop.  My tendency is to absent-mindedly play with clips until I manage to break them off, so the loop is a plus for me.

The marketing text also describes the pen as 'pretty'.  Pretty works for a description, but I think 'handsome' fits just as well.  The colors and decoration are more elegant than glamorous.  I wouldn't call it masculine, but I wouldn't call it feminine either. 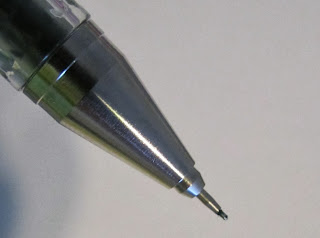 The Maica has a needle-point tip--I've written more about that in the performance section.

Performance
The 0.3 mm needle-point tip produces a very fine line.  I had no problems with the ink blobbing or feathering.  It will smear, but not that easily.  Possibly this has to do with the ink flow.

I found the Maica's flow better than many gel inks.  No priming is necessary to get the ink flowing, but it takes some time to fill in solid areas.  It was fine for my normal writing speed, but a bit slow for some of my drawing techniques.

The tip has just a bit of flex to it.  The tip isn't scratchy, which is a problem I've found with other metal-tipped pens of this point size.  It lays down a smooth, crisp line.

I had no problems with skipping.  However, I tend to draw using the side of the tip to change the width and boldness of the line.  The ink flow cut off when I did this.  I wasn't surprised because most metal-tipped pens have the same problem.

The Maica is slightly too large for my small hand if I post the cap.  It doesn't affect my writing, but my grows tired if I use it that way for long. 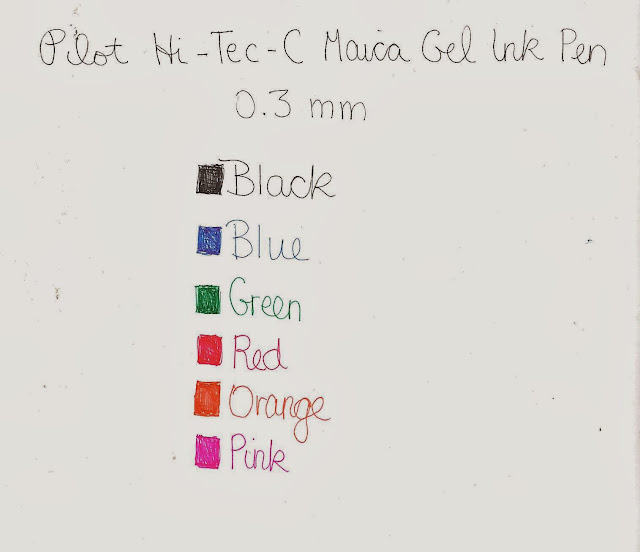 I did several drawings, using paper of varying smoothness, hardness and tooth.  The Maica performed well on all of them.

Bright White Sketch Paper
This drawing was done on paper that is smooth and has a fairly hard consistency. With this kind of paper, metal tips often cause an embossed effect on the back of paper.  The Maica left some slight embossing in the areas that I filled with solid color.


White Vellum, Slight tooth
This drawing was done on toothier, softer paper designed for both dry media and washes, so it was easier to build up color.  The Maica flowed well, with no feathering, pilling or tearing.  I was able to get both light, fine lines for shading as well as darker lines for definition.

Translucent Design Vellum
This drawing was done on a very hard, slick vellum meant for tracing and drafting work.  Though I had to work harder at it, I was still able to get both fine lines and solid color.
Off-white Engraving Paper
Engraving paper is very soft.  Any pen faces the challenge of becoming clogged with fibers.  The Maica's tip did need to be cleared a few times, especially when I was layering the ink for solid color.  I was still able to get fine solid lines, though more pressure was required.

Watercolor Effect
When I first received these pens, I posted a teaser showing how they could be used for a watercolor effect.  I really liked the color and couldn't resist playing around with it.  To my surprise, I couldn't immediately reproduce the effect.  And it was so easy the first time!

It still is, but I discovered that you can't just gently brush over the ink with water.  You need to use a very wet brush--wet enough for the water to stand.  Wet the ink, let it set for a few seconds and then move the water, not the ink.

I found that if you squirkle the lines you get a nice textural look.


Overall
I've ordered all the pen colors not included in this set, if that tells you anything.  I found the Pilot Hi-Tec-C Maica Gel Ink Pen to be flexible and to produce beautiful color on a wide variety of papers.  In the past, my biggest issue with metal tips in small sizes has been the scratchiness.  The Maica is NOT scratchy in the least.

It is a little heavy for my hand, but not bad if leave the cap off while writing or drawing.

It is also a beautiful looking pen.  That isn't a big priority for me, but it doesn't hurt!

Disclaimer: I received this product for the purposes of this review.  I received no further compensation and all opinions are my own.