on May 23, 2017
Even though I'm posting this on a Tuesday, my plan is to post a Fantasy Landscape step-out or a step-by-step every Sunday, until I get tired of doing them, or all of you get tired of seeing them.

Starting out, I want to stress that I'm keeping it as simple as I can. I'll be sharing tips, techniques and ideas, but these are fantasy landscapes, so I'm making up the rules.  My rules will be influenced by the rules of drawing-composition, pattern, and perspective, but sometimes I'll break those rules. Gravity and science just aren't the same in a fantasy world - they are much kinder in mine.  Nobody ever grows old, either,  so you can keep on playing like a kid while you are drawing Fantasy Landscapes, lol.

Today, I'm starting with something very basic - the orientation of your piece of paper.  You probably know the two orientations, Portrait and Landscape.

Aha! You might think - and rightly - that the landscape orientation is better for landscapes.  It is. Except when it isn't. 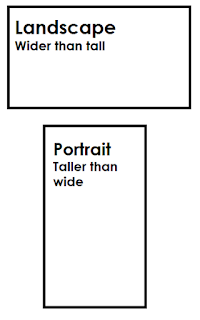 So when would a portrait orientation be better for a landscape? In my fantasy world, there are two reasons for using a Portrait orientation.  I'll save one reason for another step-by-step.  Today, we are using Portrait because we want the viewer to think "How tall that xxxx is!"

As you see in the example below, there are short objects too, and there might be tall objects in a landscape orientation.  But you would choose portrait, if those trees (or other tall objects) are the focus of your drawing. 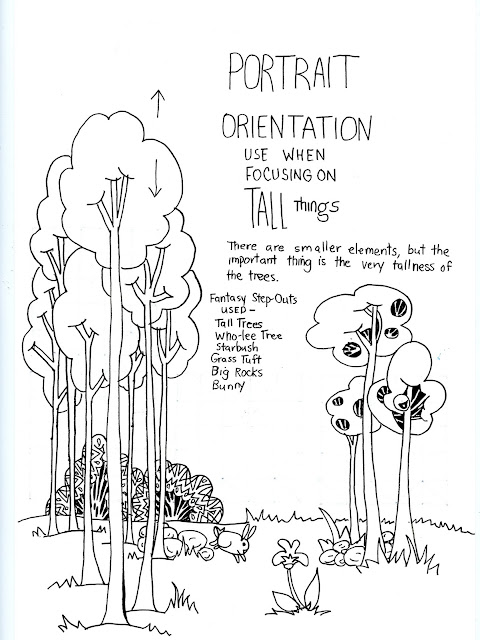 To draw a similar fantasy landscape, follow the step-by-step below.  Note, that I say similar.  It is slightly different.  I did that on purpose.  I'm drawing my fantasy world, and you should draw yours.  Don't try to make any two drawings exactly the same.

Good rule of thumb.  Read all the instructions before you start drawing!

Are you surprised that I chose the Tall Tree step-out to start with?

This first tree will seem to be the closest, and all the other trees should be drawn behind it.

Notice that I didn't worry about getting my lines straight.  Trees in a fantasy landscape are wobbly (and most in real life too).  I also had an OOPs! about half way down.  I'm not going to edit out my oops.  I won't worry about them and you shouldn't worry about yours.  No one will notice in the finished piece. 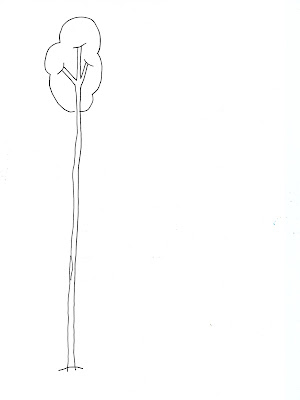 Look at the bottoms of the trees.  The first tree is closest so none of the other trees should start lower than the first one.  These are wild trees, not orchard or nursery trees, so they don't grow in a straight row.  Stagger them.

Now look at the tops of the trees.  Even though the second and third trees started higher on the page, they are shorter than the first tree.

Rule: In a landscape, something that sits higher is farther away in the distance, and may or may no be taller than closer objects.  The lowest point of the object is more important than the highest point in conveying distance. 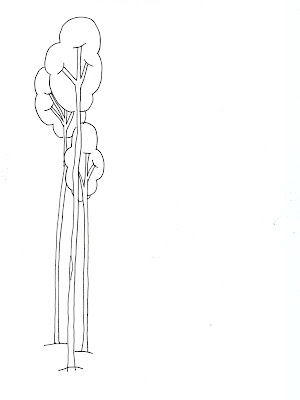 Continue drawing more Tall Trees until you have 5-8 trees, depending on the size of your paper. 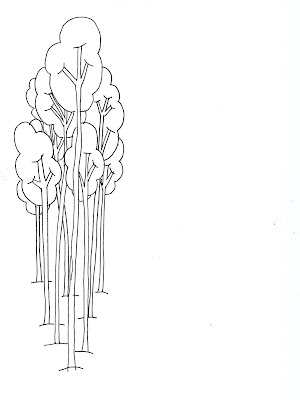 Now add some Grass Tufts.  Establish the horizon line, where the earth meets the sky.  This will be the highest line of grass tufts behind the trees and the furthest point away from the viewer (unless you add clouds or the sun).  Don't draw the line all the way across though.  You'll be adding some trees that are closer than the horizon line, but cross over it because they are so tall. 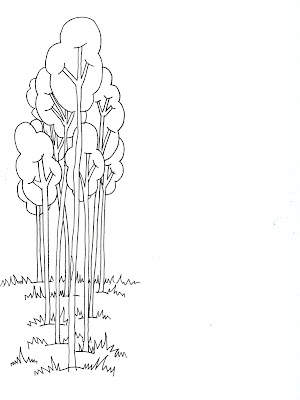 To the right, I added three Who-lee Trees, using the same steps as I did with the tall trees.  These two set of trees have a relationship of balance.  Each type of tree dominates one side of the page. But only one type should dominate the whole drawing, even if only a little. Therefore, when you draw the Who-lee Trees, you should think about the way they will relate to the Tall Trees.

One or the other should be dominate to the other.  I wanted the Tall Trees to dominate, so I drew fewer trees, and made all of them shorter than the tallest Tall Tree.  You might choose to let the Who-lee trees dominate.

I also made sure that the closest Who-lee Tree was further back than the closest Tall Tree, and the farthest was closer than the farthest Tall Tree.  I felt this gave a good sense of balance between the two types.  It isn't the only valid choice though.  You might want to try changing that relationship and see how it changes the feeling of the drawing.

The darkness of the 'wholes' still gives more dominance, but I'll take care of that a little later. 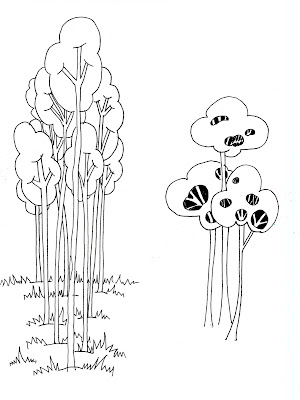 Next, add some Big Rocks.  The size of your rocks and the number you draw can make a big difference in the finished drawing.  Your rocks could become a wall, or you could have only a few big rocks that might rival the trees for attention.  I chose to use them as embellishment, adding a little interest, but not drawing the eye.  I also had another reason for keeping them fairly small. 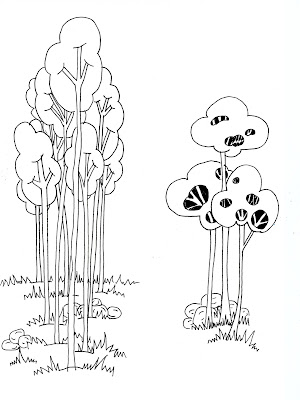 Do you see him? I added a Bunny, who looks a bit like the Big Rocks and is about the same size.  If the rocks were bigger, the bunny would stand out more.  By keeping them about the same size, the bunny is partially hidden.  People might miss him, but those who find him will think he's a nice surprise. 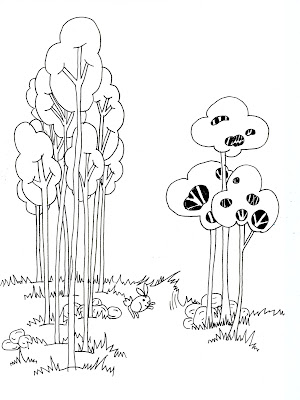 I added to the ridge, by drawing a wobbly dividing line.  It definitely shouldn't be straight.  Are you familiar with the saying that 'Nature abhors a straight line'.  In most cases, you should avoid them in a landscape.

Then I added a line of dashes to indicate the edge of the ridge.  Now it looks like the bunny is hopping from one side to the other.

I drew the ridge hoping to add to the dominance of the Tall Trees, but  I actually like the first version of this drawing, without the ridge, better.  I believe if this were a landscape orientation rather than a portrait that the ridge would have worked because of the wider range of space.  And that's why landscape orientation is more often used - more room to explore the possibilities.

I added a Petal Plant and Grass Tufts.  I made it the closest object to the viewer, so that the viewer measures more distance between the lowest object and the farthest object.  This tricks the eye into feeling there is more depth in the drawing. 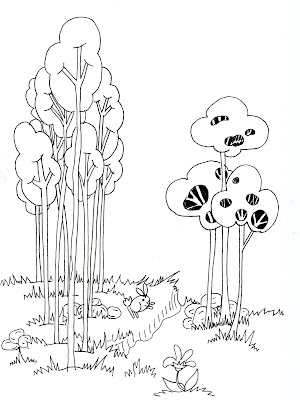 I talked briefly about balance and dominance between the trees earlier, and I wanted my next addition to work toward that issue. This time I was looking at values - the degree of light and dark.  Those 'holes' in the Who-lee Trees are the darkest thing in the drawing, which gives them more weight than I want them to have.

I decided to add Starbushes, behind the Tall Trees.  They add more interest to the background, plus they have darker values, increasing the dominance of the Tall Trees. 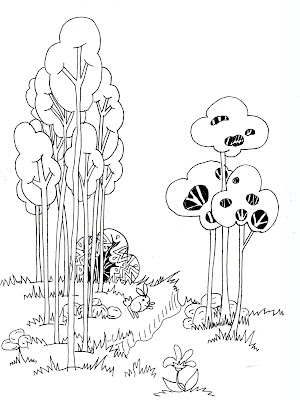 Two Starbushes were enough in this case, though I used three in the first example.  The difference had to do with the size of the bushes, and the amount of darkness added to them.

And that brings me to another point.  Starbush has a pattern  inside of it, and it's a little difficult to draw that pattern while weaving it around the Tall Tree trunks (say that 9 times real fast, lol) .  But, in this case, the Starbushes are the farthest thing away from the eye.  And things in the distance are always more blurry, less detailed and less attention is paid to them.  The moral being - don't worry about getting the pattern right.  The dark values are more important, If the Starbush was up front and closer, then you should spend more time getting the pattern just right. 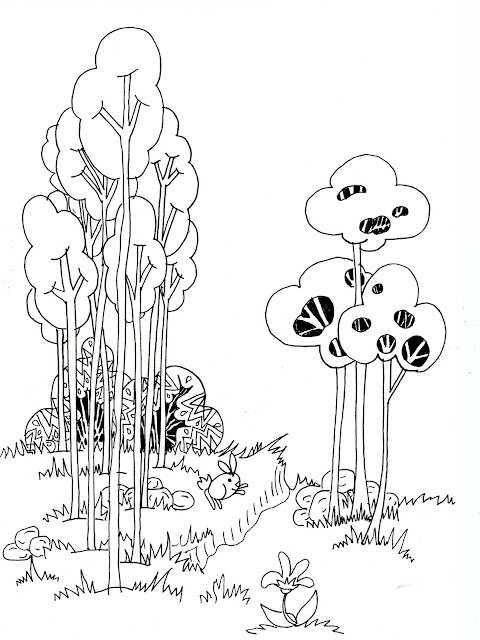 And I feel that gives you enough to think about.  I hope this was helpful.  On Sunday, I'll tackle the other kind of Portrait Landscape.