on June 01, 2017
Well...I intended to only post Fantasy Landscape stuff on Friday and Sunday (eventually only on Sunday) but I've been so busy drawing the series that I forgot to plan something else for today's post.

So you'll get a Step-Wisely today and a Step-out tomorrow.

Step-Wisely? I think I already explained this but when I post something the discusses tips, techniques or how things work in my fantasy world, I'm calling that post a Step-Wisely.

While thinking about this series, I've been studying examples of Naïve art.  You might want to google some photos of it yourself, because there is some awesome stuff out there.

While looking over various Naïve artworks, I realized that roadways are a very important part of the style.  And by roadways, I mean anything that winds around, borders or separates the sections of a landscape, including rivers, sidewalks, fences, train tracks, and walls.  Today, I'm focusing on roads, though.

In my fantasy landscape world there are three kinds of roads.  They border and separate in different ways.  It doesn't really matter whether they are 5-lane highways or simple country lanes (though country lanes are much more charming!).  It is the way they move through the landscape that counts.

To increase the feel of the distance, the road is wider at the beginning (the bottom) of each slope and narrows toward the top.  The road in each subsequent slope is narrower than the slope before it. 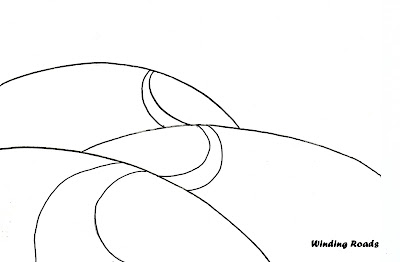 Wrap Around Roads
The Wrap Around Road also winds around but not gently. It twists and curls like a snake, wrapping around various objects.  It disappears at times, when it wraps behind something.

If you want to imply distance, the road should be wider at the start (the bottom) and be slightly narrower each time it reappears from behind an object.  However, this kind of road is also often used in landscapes where there is no sense of distance or depth.  If the road is a lane or foot-worn track, it may widen and narrow at random, as it does here. 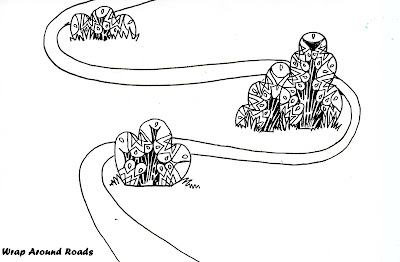 Striped Roads
Striped roads can be straight or slightly curved.  They carve your drawing into sections, that you fill with trees, flowers, rocks and animals. This is a good roadway to use if you like to create rows of objects.

If you want to imply distance you make each road narrower as you go up the page.  Items within each section become smaller to show they are further away.  But if you wish, you can ignore distance altogether.

Slight curved and diagonal to one another.

Straight and parallel to one another. 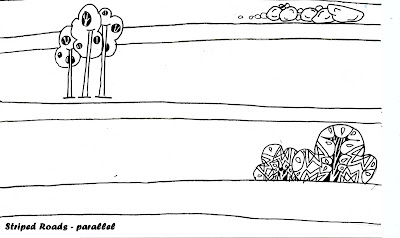 These are the three roads in my fantasy landscapes? What other kinds of roads might you have in yours?  Please share your thoughts!

Tomorrow, I have a step-out showing the basic bush/shrup/tree-shape and what it's good for.