on July 14, 2017
If you are here for the Heron step-out, it scroll to the Performance section.

Today I'm hosting a giveaway for Exaclair, USA and they are giving away FOUR of these BD Comics Manga Paper pads.  It's been a long time since I drew cartoons or comics, but I have to admit my heart always gives a thump, and I think 'cool' whenever I see one of these storyboard pads. 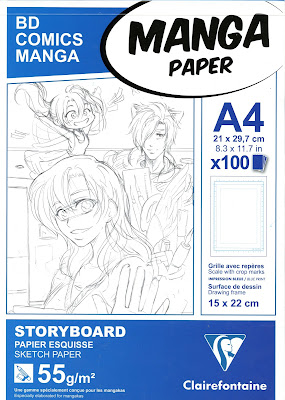 A storypad (whether Manga or not) has specialized paper with pre-printed guides, numbered ruling all the way around and paper meant for tracing, so that you can trace figures for animation to keep them in the exact same place, and only making slight changes.  The paper is formulated for pen and marker.  Usually, I try all sorts of different mediums, but I think that would defeat the purpose here so I'm going to focus on pen and marker, and how you might use this paper.

Look & Feel
A storyboard pad has specialty paper with a pre-printed non-reproducible scale in light blue ink on each sheet and is meant for drawing comics, and animation.  It is used for both working out the illustrations for each step of a story-line, and for sketching the finished work.

Although, the pre-printed blue is supposed to non-reproducible in a scan, it obviously does scan.  I did have to punch up the shadows for it to show well - it normally scans very lightly.  I'm not sure if today's scanners are just better, or if there are special settings that would allow you to block out the blue.

When drawing animation, you need to be able to trace from at least three copies of your previous frame.  So, the paper has the look and feel of tracing paper, but it is more flexible and stronger than tracing paper.  If you are drawing something where you are repeating an element, and want the repetition to be exact, this is a great quality, whether it's for animation or Manga or whatever you are doing.

There is number ruling all around the edges to help you line up the elements of your drawings. 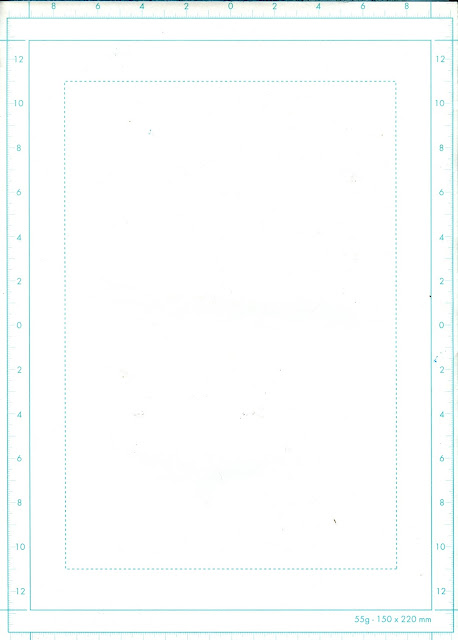 The paper is bound into a pad and there is scoring at the top of the cover to make it easy to fold the front cover to the back for easier holding and drawing.  The paper is glued and without perforations.

If you intend to carry this, you'll want it placed securely in a folder or something that will keep it from sliding around.  The paper is both easily wrinkled and easily removed from the pad.  It is fairly resistant to accidental tears, though. 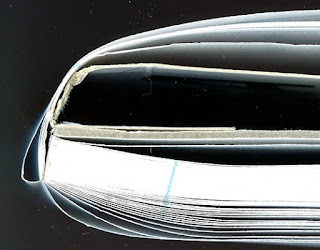 Performance
Usually, I create examples using a variety of media and give my impression of how well the paper did using that specific media.  I decided to do this review a bit differently because this is a specialty paper, meant for manga style work.  However, it can be used for different things so I thought I'd show different ways the paper could be used to take advantage of it's special formulation.

I will say that the paper handles ballpoint pen, pencil, india ink pens (Pitt artist pens), plastic tip artist pens (Tombow Fudenosuke, Stabilio 88, Pigma Micron and water-based marker (Tombow dual brush) tip quite well without feathering, bleeding or bleed-through to the back.  Drying time is slow, and you do need to be careful not to smear.

Drawing a Step-out
I had this idea for a heron step-out for my fantasy series.  It turns out that the heron is such a tall and elegant bird, that the proportions of the neck, legs and base of tail to base of wing are all about the same.  This makes it a difficult bird to draw, so I decided it's a challenge step-out.

After several attempts, I finally drew an example I liked, and decided I could use this manga paper to draw steps that lined up nicely.  This isn't too different than the steps you would use for drawing comics. 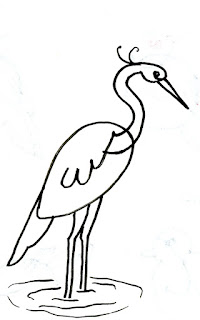 I placed my sketch under the sheet I was using for the step-out and determined how much space I needed for each step.  With a ruler, I used the guidelines to block in the areas for each step, and then to give me a guide for lining up my steps.  I had to run this scan through Picasa to punch up the values, so hopefully you can see the pencil lines. 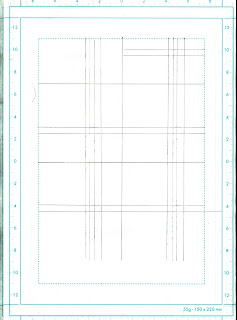 Moving, my sketch under the paper to the correct position for each step, I drew the step-out and erased the pencil lines.  I decided to scan in the whole sheet - you might be able to use the guide lines if you attempt to draw this bird.  I'm not sure the blue-print will print out though. 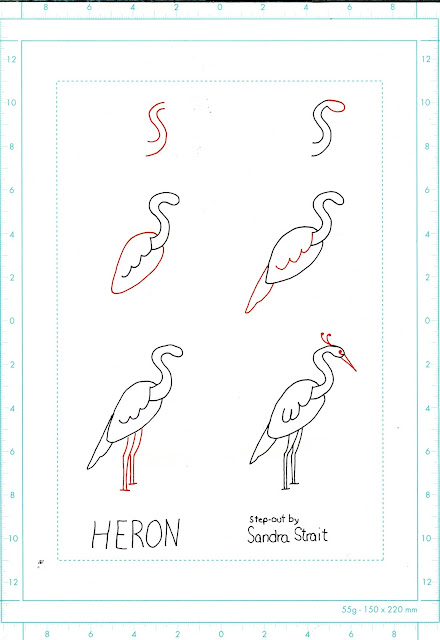 Using as Transfer Paper
I will say right up front, that this pad is spendy to be used just for transferring tracings. Tracing paper itself would be cheaper.  But if you need to work out your drawing first, especially if you use those rulings to help with perspective, then this is a good use.  I also put aside any of the paper where I've made a mistake, but there is still quite a bit of unused space.  Then I can use it later to trace or transfer, and nothing is wasted.

I took a photo where I liked trees and the shapes in the photo, but didn't want to draw exactly what was there. 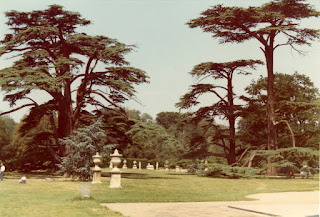 So I traced the outlines on one sheet of the manga paper (one where I had goofed up a step-out I was trying), using heavy pencil strokes to lay down a lot of graphite lead. 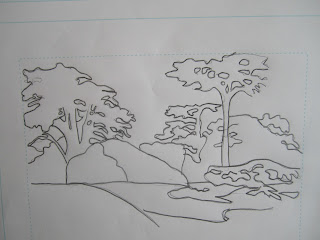 Then I turned the paper over and placed it onto the sheet where I wanted the finished drawing. I took the pencil and scribbled all around the back of the traced image. 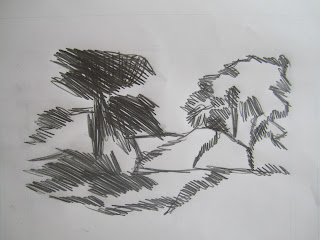 This pushed the graphite on the front onto the new sheet, leaving a faint image for me to ink over. 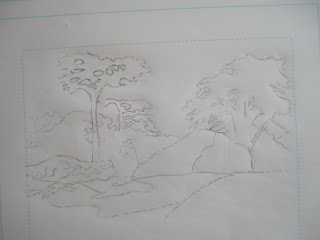 Drawing a coloring page and keeping the original drawing
I drew this page with a Stabilio 88 pen.  I waited half an hour to make sure that the ink was thoroughly dry. 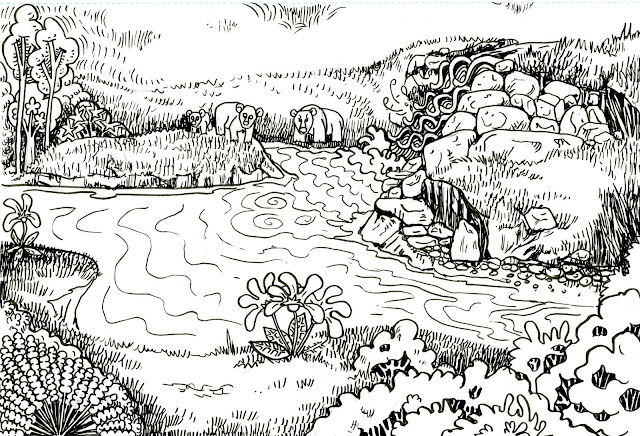 I laid the pen drawing under another sheet of the manga paper and carefully traced it.  The Stabilio 88 is not water-proof, so I used a Fudenosuke soft tip brush pen for the drawing this time. The Pitt Artist India Ink brush pens I used for coloring are not watercolor, but they are wet enough to make the Stabilio run.  After coloring I used a Sharpie paint marker to punch up some highlights and lighter areas. 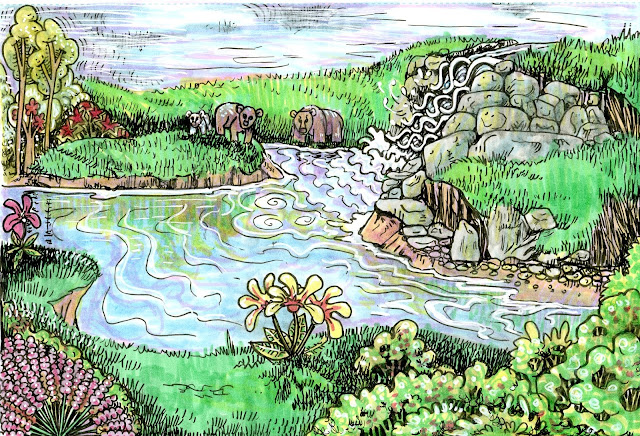 Overall
The BD Comics Manga Storyboard Pad is a glued pad of specialized paper, with a storyboard formatting in pre-printed non-reproducible scale in light blue ink (which does show up in scans).  It is meant for working out scenes for animation, manga and comics.

It is ultra thin, but stronger and more flexible than most tracing paper.  The sheets tear away easily - perhaps too much so.  They also wrinkle easily, as you might expect with such thin paper.  If you intend to carry this pad around, you'll want to have it in a folder or something to protect it.

The paper works very well with pen, marker and pencil.  It's excellent for working out illustration sketches, tracing, and transferring drawings whether you doing animation, manga, comics or something else altogether.

What Is the Prize?  FOUR winners will receive a BD Comics Manga Storyboard Pad as pictured above.

How to Enter? Cut and paste these words: 'I want to win a BD Comics Manga Storyboard Pad' into the subject line of an email, and send it to me at  LifeImitatesDoodles [at] gmail [dot] com. (replace the words enclosed in [ ] with an @ and a . and make sure there are no spaces)

Who Can Enter? Sorry. This giveaway is open to U.S. residents only

Who is Giving Away the Prizes? I'm hosting the giveaway, but the prizes are coming from Exaclair USA.  They will mail the prizes to the winners.  I want to thank them  for their generosity.

Disclaimer:  I received the xxxx from Exaclair USA for the purpose of this review and giveaway. I was allowed to choose the item from the line of products that Exaclair USA distributes.  I'm excited about hosting this giveaway, but tried not to let it influence my opinion, and all opinions are my own.  I received no other compensation.