on July 09, 2017
Today's step-by-step focuses on using basic shapes to create your fantasy landscape.  Instead of comparing two different examples, I'm sharing an example all the way from my first steps of creation to the finished piece in color. 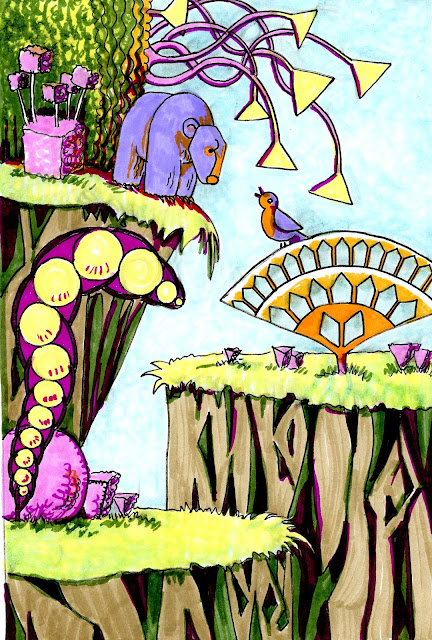 SUPPLIES
Paper: This was drawn in my emnotes notebook.  The paper is similar to printer paper.
Ink Pens: Tombow Fudenosuke hard tip, Graphic Micron and Pigma Micron sizes .03 and .05
Color Marker Pens: Tombow Dual Brush Pens.  These pens have a brush nib end and a pen nib end. They are water-soluble and can be wet to use like watercolor.  For this drawing, I only used the brush nib and did NOT add water.
Fantasy Landscape Step-outs used: Peacock 3 Plant, Scribble 3 Plant, Flipple 3 Plant, Fat Bird Two, Papa Bear, Bell 3 Plant

Step 1: Work out the composition, values and shapes

I'm not good at just visualizing what I want to draw and then drawing it.  So I start by just messing around with a vague idea in mind, not worrying about any rules or techniques.  Usually after 10-15 minutes of drawing, I have a pretty good idea of what I want. Then:

Using my initial drawing, I traced each object on the page, a section at a time, scanning before I moved on.  Time consuming!  I traced the sections in the order that I originally drew them so they would overlap properly.


First I penciled in the cliffs, so I'd know where to place everything else.


Then I drew the Flipple plant.  It loans itself to curving and I curved it to point toward the area between the bear and the bird.  I knew where that was because I had penciled in the cliffs.

After adding some general detail in the form of poodle plants, I inked in the first cliff.  Notice the overhanging grass and how the complexity in the cliff detail is greater on the inside edge.  I did this as a subtle way to move the eye toward the middle cliff.

I'm playing fast and loose with my lighting and shading in this piece.  I'm worrying more about how the values move the eye than whether they are in the correct place for realism.

I drew the peacock plant first.  In my original drawing I drew it too large so that it ended up going off the page and so that the left edge is almost exactly in line with the flipple plant.  These are both errors in terms of composition.  I meant to change it as I did my tracings and I forgot.  Rather than start over, I decided to keep it so you can see how this leads the eye off the page.  The fix would be to make the plant smaller so it clears the edge on the right and falls a bit below the flipple plant on the left.  The path for the eye was meant to be that you'd follow the flipple, fall down to the corner of the peacock where the points would push you up to the bird.

Now I added the bird, which is one of the items with the most interest in this drawing. I also added some filler detail in the form of more poodle plants.  If you wanted to keep your drawing really simple because that is your taste or you intended to add tangle patterns, the poodle plants are the kind of detail you would leave out.

I inked in the cliff, repeating the overhanging grass and complexity of cliff detail pointing to the third cliff.

Now I added the bear, the most important object in terms of interest.

I wanted lots of contrast around the bear and to push the viewer's eye back toward the bear, so I added a greater amount of detail and texture with lower interest value.  The plants could either be poodle plants or scribble plants.  I already know that I will scribble in texture with color so I'm calling them scribble plants.

The wide open space in the upper right seemed to draw the eye off the page, so I decided to add bell plants flowing down toward the bird and framing the bear.

I finished the line drawing by inking in the third cliff.  Each cliff is its own section and each has similarities-the overhanging grass, the poodle/scribble plants and the cliff details.  But each section also has a unique focal point.  The plants on the lower and middle cliff lead the eye toward the next cliff, while the plants on the top are more of a block, sort of bouncing you back toward the bear.

When you look at the drawing at this stage, it probably seems flat and a bit crowded.  Even though I've created some flow and framing to lead the eye around the drawing, there is so much going on and so few value changes that the drawing is confusing.

I'm making a point of this, because I think it is another reason that people are unhappy with their work.  This can be rephrased to say, "How can I tell when my work is finished?"  That isn't always easy to tell, but if you don't have a contrast in values it probably isn't finished yet.

Now is the time to start thinking about where to place your light/dark values.

Guide rule: Don't judge your work too early, especially if you haven't added contrasting values yet.


Step 3: Color the Drawing
Color opens up a whole new world of opportunity, but there are so many variables that it gets confusing really fast.  So before we continue, let's talk about some properties of color.

I'm going to focus on a color's:
Some information you should know about a color's transparency or opacity:
Color Glossary:
For a full list of terms I use often, check out the Fantasy Landscapes glossary here.

If the colors you use are not as transparent or opaque as you like, it could be another reason for unhappiness with your work.  But before you rush out to buy something else, try to decide what you are looking for.  Do you need something that allows your drawn lines to show through and that changes a lot when you mix the colors?  Or are you looking for dark colors that only change slightly when mixed but cover an area boldly and give a stark contrast to lighter colors?

When you see art that you like, consider asking the artist what medium and brand they are using (probably not an artist who is trying to sell their work professionally though), so you know something specific to look for.

Let's keep things simple.  I'm using Tombow Dual Brush pens which are more transparent than many brands of marker/pens.  I'm going to rate the degree of transparency and value for each color I use on a scale of three - Transparency, Semi-Opaque, Opaque for transparency and Light, MidTone, Dark for value.  My ratings will only apply to the color and brand of pen I'm using. This is very rough, because the actual degrees are endless, but it will get you into the ballpark.


Okay, back to the step-by-step.

Because it is far easier to go darker than to go lighter, I start with the lightest and most transparent color in my set of Tombow Dual Brush pens - Pale Yellow.

Even though my color is light, I use a scribbling motion and let some white show through.  I intend to layer another color and this scribbling will add some texture and variation of color.

I colored the sky with Glacier Blue (Rating: Transparent Light), again using a scribbling motion. After coloring all of the sky, I went back over the areas around the bell vines, the bear, the bird and the peacock plant to up the value/contrast.

Then I added blue to the yellow in the grass (but not the flipple or bell plants), leaving some of the yellow showing.  Blue and yellow mixed make green.  The grass is darker in real life, because that is one problem with transparent colors.  Light reflects through them, and scanners often pick up more of the color beneath than the color on top.

Since I felt that the peacock plant was too dark in my original drawing, I decided to let the sky show through, so I colored the inside part of the pattern.

There are certain color combinations that POP! These are called complimentary colors.  Roughly, they are yellow/purple, orange/blue and red/green.  As I discussed earlier, not all colors in a family are the same - some yellows are more green than red, etc. and that has an effect, as do value and transparency.  After testing the colors of dual brush pens I have I chose Periwinkle and Orange as a combination, and Pale Yellow and Dark Magenta.

I started applying the Orange.  I also add Chrome orange to the top patterns of the peacock plant.

Then I added Periwinkle.  Yes!  My bear is a bluebear!  Bluebear meets the Bluebird, lol.  I applied more of the Chrome Orange to plant behind the bear to help with framing him.  This is the only orange I use in the drawing because isolated colors draw the eye.  As it turns out, it wasn't enough but I'll discuss that later.

I wanted to keep the colors of the filler detail light and not as likely to draw the eye.  The Orchid was a good choice because it was a nice contrast to the yellow, but similar in transparency and value so it doesn't pop as much as the magenta will.

I wanted the cliffs to be background so I chose a nearly neutral color with overtones of violet, Sand.  I applied it using the side of brush nib in long strokes to imply the texture of a cliffside.

When I added the Deep Magenta, I immediately realized I had made a mistake in my values.  From my tests, I thought the Orange/Periwinkle would pop as much or more as the Pale Yellow/Deep Magenta.  But the dark intensity of the magenta took over.  It would have helped if I had more orange next to the periwinkle.  As it is, the first thing your eye is drawn to is the flipple plant.

I considered redoing the drawing, but decided that this is actually the kind of thing I want to show you.  Even if you've tested your colors there are enough variables that you can be surprised.  This is the kind of thing you want to look for when you are unhappy with a drawing.

I don't think this ruins the drawing and most people wouldn't have noticed if I hadn't pointed it out.  But it means I didn't quite succeed in what I was trying to do.

Next I used Dark Olive in the bushes behind the bear and along the cliff.  I used the same color in both places, but notice the difference in color.  I did scribble when coloring the bushes, allowing yellow to show through, but the Dark Olive is semi-opaque, so the color underneath has more affect.

To finish off, I used Dark Plum over the Dark Olive to get my darkest values, and notice how it turned almost black and doesn't really look green at all.  That's opacity versus transparency.

There you have it.  I don't plan to go through the coloring phase very often.  It's too big of a subject.  Perhaps when I've exhausted the possibilities of drawing fantasy landscapes, I'll spend more time on how to color them!