on October 29, 2017
Today starts the fourth of eight giveaways.  I'm reviewing and giving away a block of Leonardo Watercolor paper. The giveaway is international.  Giveaway is now closed.


This giveaway would not have been possible without Hahnemühle's generosity. Please consider visiting their Facebook page or website to learn more about their wonderful line of products. 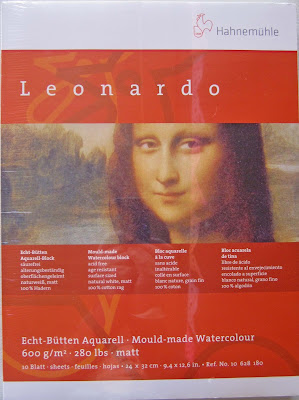 Suitable for watercolor and acrylics.

Look & Feel
Hahnemühle Watercolour Blocks are both glued and gauzed on all four sides with one unbound corner (see photo).  I had already removed a couple of sheets before I took this photo, so you can see that the gauze may need to be trimmed around the sides as you go. It isn't difficult to do, but if you are like me, you need to remind yourself

You can see from the photo how thick this 600 gsm/280 lb. paper is, and the thick cardboard backing.  The front cover, which is somewhat like magazine stock, folds back so that it is completely out of the way. 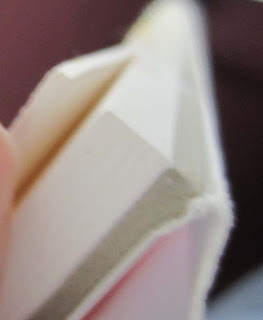 The paper is mould-made, 100% cotton, acid free, lightfast, and age resistant. It comes in a hot pressed and rough surface as well as the cold pressed that I'm reviewing today.  It is surface-sized, which helps slow the absorption of water.

In some ways, I have to question the need to put 280 lb paper in a block.  It is heavy enough to resist buckling and curling without it.  That said, I do find it nice to have the sheets underneath protected from splashes and drips.  There was a reason my parents didn't call me Grace, lol.

Off the block, the paper is stiff, as you might expect with of this weight. The surface is not too hard, not too soft.  Surprisingly, the texture was easy to photograph. Though it looks pretty rough, it isn't. The texture does show in your paintings.  That will please some and not others. 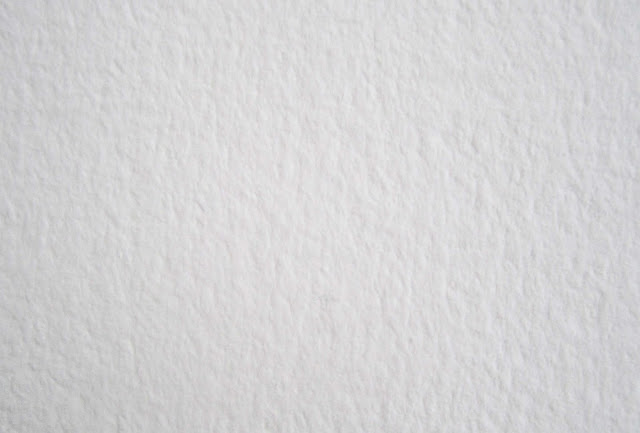 Performance
Recently, I've reviewed the William Turner, and the Cézanne watercolor blocks, so I decided it was time to change things a bit.  Using exactly the same tests in the same way makes for boring reading and an uninspired artist.

I did tape off a sheet into four quarters.  But to begin with, I did an exercise where you pick a word from a jar and then try to paint something that describes it.

On the left, I was painting 'Transparent' and on the right, 'Aggression'.  Aside from the fun of such a thing, I was testing the flow of paint and the ability to lift color.

The paint flowed well, but not explosively.  It was easy to control the paint and get soft edges where I wanted them, and hard edges where I wanted them.  With 'Aggression', I used dry brushing for the red streaks at the bottom.  The texture of this paper makes dry brushing very effective. I found myself doing it with transparent, too, because I really like the way it looks.

I was trying to get the impression of bubbles with 'Transparent' but misjudged where I should put my highlights to reserve the white of the paper.  That gave me a good excuse to see how easy it would be to lift color.  I let the paint dry before lifting, moving back and forth between it and Aggression.

With lifting, the texture both worked for and against me.  Color lifted, but not evenly.  It was hard to work down into the texture to get it all.  That said, it creates an interesting effect that could be used to create shining light or mist.  I think it helped to imply transparency. 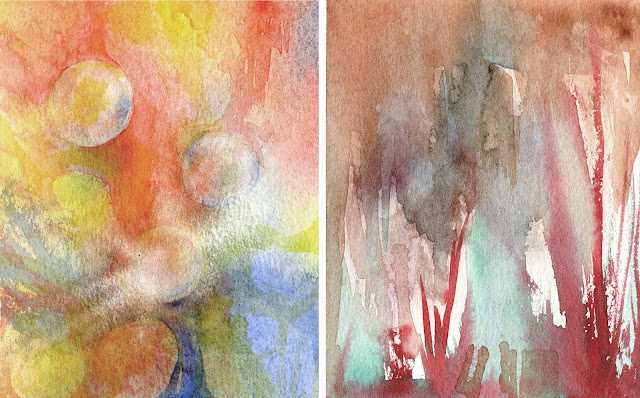 Given the textured effect I got from lifting, I was expecting heavy granulation, so I was surprised that it was less then I got with the Turner and Cézanne papers.  I had used different colors, and thought that might make the difference or that I just hadn't used enough water, but a repeat on another quarter gave the same results.  There is a nice amount of granulation, but not as much with the other two Hahnemühle mould-made watercolor papers I've reviewed.

On the left, I lifted color while the paint was still wet.  Then I tested how rough the paper would be on pens.  I used a Fude-style plastic nib on the left and a nylon-fiber tipped technical pen on the right.  No damage to either pen and I was able to get reasonably solid lines. 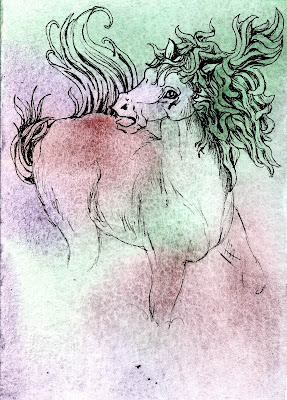 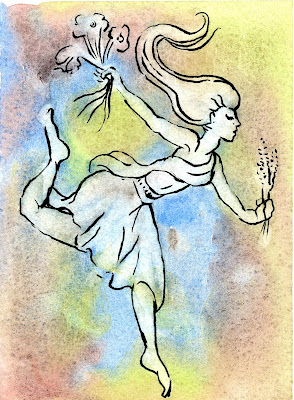 I just had to be sure, about that granulation, so I did another painting with granulating colors.  This time I also tested with masking fluid, using it to reserve the white of the Zebra (a good brand of masking fluid) and splattered more along the ground (cheapo masking fluid).

Even though I'd already overworked one piece to try and damage it, I did more on this piece.   The heavy granulation in the upper right came from repeated lifting and re-painting.  I don't normally glaze with granulating colors, but it worked well on this paper.  I stopped short of working to the stippled white effect I got on the first piece though.

After everything was thoroughly dried, I lifted the masking fluid with no problem whatsoever.  I did some more glazing, and once all that dried, I used a pen to outline the zebra and trees. I didn't find any areas where there was unseen damage. 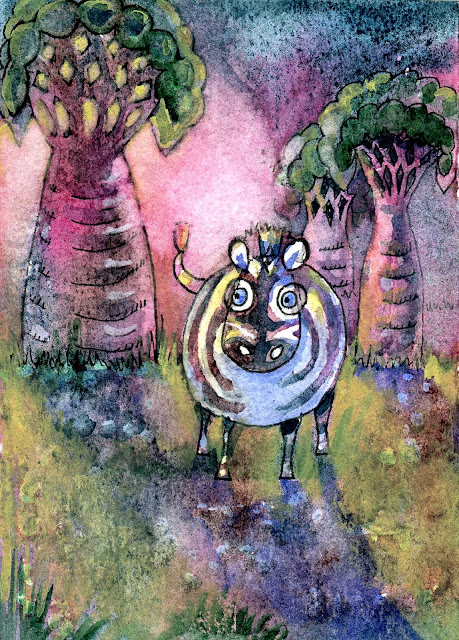 So now I was ready to do a full-size painting. 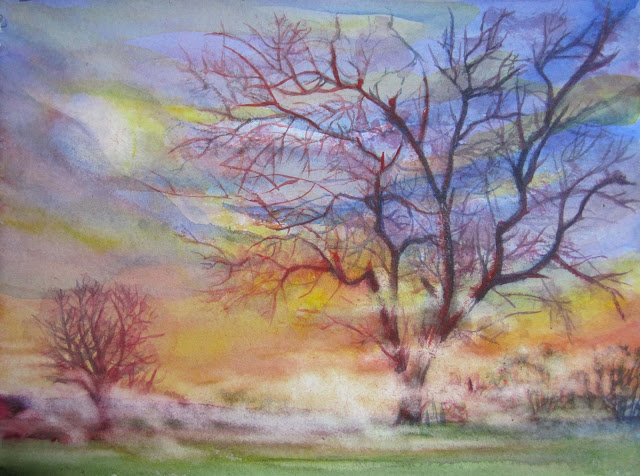 Overall
The Hahnemühle Leonardo Watercolour Cold Pressed Block has 280 lb mould-made 100% cotton paper with surface-sizing. It's thick paper, with a medium hard (or medium soft, depending on how you look at it) surface.  Even off the block, the paper is heavy enough to resist curling and buckling.

The color flows well on the paper giving you a great deal of control over soft and hard edges. It handles masking fluid well. You can see the texture of the paper in your finished painting.

Color is easy to lift from the wet surface, but once dry the texture means you get a white, stippled effect when you lift color.

Strangely, given the texture, granulation is good, but softer than it is on the Turner and Cézanne Cold Pressed papers. Whether that is good or bad will depend on your taste.  I like it both ways.

GIVEAWAY INFORMATION  (Giveaway has ended)
Who Can Enter? This giveaway is international.
What Is the Prize?  One winner will receive a block of Hahnemühle Leonardo Watercolor Paper as reviewed in this post.
How to Enter? Cut and paste these words: 'I want to win Hahnemühle Leonardo Paper ' into the subject line of an email, and send it to me at LifeImitatesDoodles [at] Gmail [dot] com. (replace the words enclosed in [ ] with an @ and a . and make sure there are no spaces).

Who is Giving Away the Prizes? Hahnemühle sent me this block of Leonardo Watercolor Paper for the purposes of a giveaway.  All thanks go to Hahnemühle for their generosity.

Disclaimer:  I earned a Hahnemühle Watercolor block at Doodlewash using DO points.  The rest of the items, including this block of Leonardo watercolor paper, were graciously offered by Hahnemühle when I mentioned holding a giveaway for the block.

You can find Hahnemühle products at the following stores.  Not all products can be found at all stores, and some carry the line, but may not have them listed.

About Hahnemühle
Craftsman Merten Spieß was granted the right to build a papermill in 1584. Over the years the mill was bought and sold until it came into the hands of Carl Hahne, who renamed the mill "Büttenpapierfabrik Hahnemühle".  Though the owners have changed over the years, Hahnemühle has produced its paper at the same place for more than 430 years and operated independently since 2002.

The company was the first to develop acid free and archivable machine made paper and is one of the last to produce high quality artist's papers and high purity filter papers for various purposes. Their highly awarded Digital FineArt Collection is the worldmarket leading paper range today.

You can read more about Hahnemühle's history and philosophy here.