on October 26, 2017
Last week, I did a review on the Schmincke 2017 Limited Edition set.  At that time, I mentioned that there were some issues with the tin I received. In talking with friends at the Doodlewash community, I learned that others also had problems and contacted Wet Paint Art where I had bought my set, and Schmincke themselves.

Both Wet Paint and Schmincke responded within a day, and I also had a discussion via phone with the National Sales Director of Chartpak, who is a partner of Schmincke and the direct importer of all Schmincke products for North America.

What I've found out is that the tins are still being made in the same manner and by the same manufacturer as they were in the past, but the shipping process had been changed.  More tins were being stacked in each case.  Schmincke believes that what happened was that the combined weight of the tins caused damage to some of the tins at the bottom.  To address this, the next set will be shipped with fewer tins per case and sturdier cushioning between layers.

Both Chartpak and Schmincke are watching the second production closely, to be sure there is nothing missed that might be part of the issue.

Edited:  This is what the tins will look like in the second shipment of this Limited Edition.  You can read more about it here. 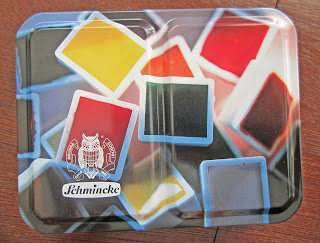 All this leads me to something else I've meant to say for a while and that has to do with reviews in general.  You've probably all read reviews that had nothing but good things to say about a product and bought it, and been sorely disappointed.

As I've been chatting with fellow artists in the Doodlewash forum, it has really been driven home how much the experience with a product can differ from person to person.  We've been discussing some of the reasons why this might be, from humidity to different papers to different styles and tastes.

You, as the consumer, should never believe a review, in total - not even mine.  This is simply because you are unique, as is the reviewer, and your experiences will never be exactly the same.  I try to be as honest and unbiased as I can, and I think most reviewers are the same.  But we'll never be able to give you a review that tells you exactly what you need to know.

Well, maybe. If one of us were your identical twin living in the same home using the exact same tools, but probably not even then.

I used to go looking for other reviews of the same product and add the links to my reviews.  I quit because of time, but I'm going to try and do better in the future.  I think it needs to be done so you can get the most rounded of impressions, to help you make the best choices for spending your hard-earned money.

And now to the more general type of post-I only had time for a quick line'n wash for hubby's lunch bag, yesterday.  It's done on a Hahnemühle Postcard. I currently have a giveaway for a tin of these postcards.  If you haven't already entered, you can enter here. 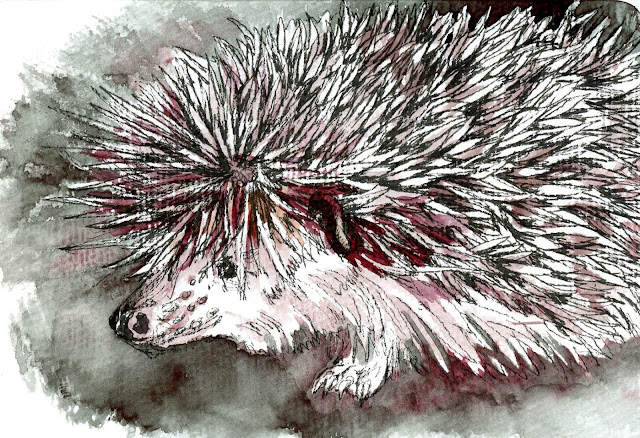