on August 28, 2010
Around 2 or 3 hundred thousand years ago, there's this guy who finds a stick. "Huh" he thinks, and picks it up 'cause it might be good for something.  He's dragging it in the dirt and he happens to look back, and sees the mark he's made.  "Huh" he thinks (not a great thinker, this one), and he starts playing around making marks in the dirt with the stick.  Then a Sabertooth tiger or something big with claws and teeth jumps out of the bush and eats him because he wasn't paying attention.
But the point is that this pattern has been around for at least that long.  It's one of the basics, because it's really cool, and you can get a shimmery effect in the center.  And because it's an example of 'Notan', a balance of light and dark.  You can look at this and see spiny thorns radiating toward a center like cactus barricade, or you can see spikes radiating outward like rays from the sun.  The white (or negative space) has as much weight and importance as the dark space.
That's big, because we're taught, from time we're newts, that the lines, the ink, the pencil is what's important, and we tend to let the white stuff just happen.  When you achieve balance between the two, then the work is balanced.
"Huh".  Wonder if that happens with life in general?
Don't get caught up on those dots.  They are only to help you end each triangle at an equal distance from the edge.  Don't worry about getting the dots centered.  In fact, play around with not centering--that's always more interesting.
Have fun.  After all, you don't have to worry about Sabertooths eating you or anything. 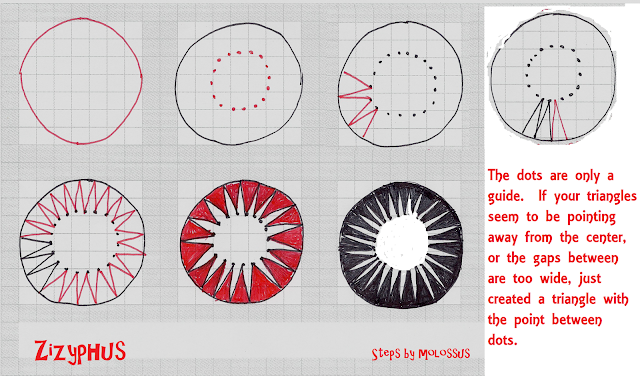 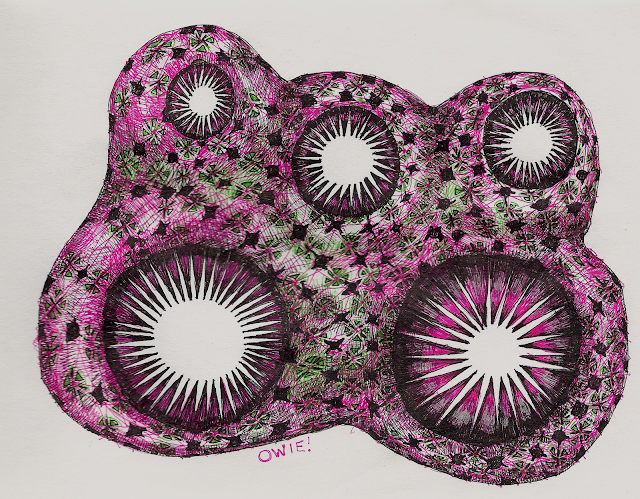