Recently I’ve been creating art that uses methods from the art form known as Zentangle®, using stamps, colors and patterns that give my pieces a Steampunk flavor.

I've been accepted as a member of the Viva Las Vegastamps! design team, and I thought my first post in that role, would be a good place to answer questions about my process, and about Zentangle® and Steampunk and how I mush them all together.   I decided to use an advertisement I did for Viva Las Vegastamps!, as an example (August 2012 issue of Rubber Stamp Madness magazine!).  This is the first advertisement I've ever done, so it's a good chance for me to show it off, too, lol! 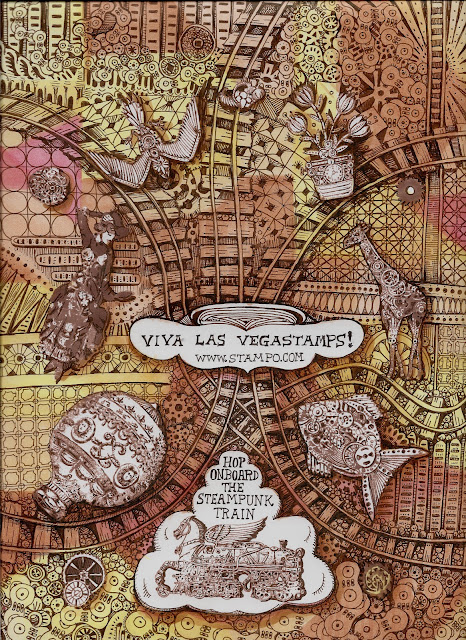 If you already know what Zentangle® and/or Steampunk are, my explanations would be boring.  So that information has been added after the tutorial.  That way you can skip to it, or just skip it, as needed.

Deciding Layout
When choosing the stamps for this advertisement, I wanted to show the variety of stamps available at Viva Las Vegastamps!.  I chose a person, an animal, a prehistoric bird, a fish, a plant, and a machine; and also chose styles-vintage, cartoon, fantasy, realistic. But, still, they were all Steampunk.  I was also looking at shapes.  For instance, the Horsetrain was flat, and made a solid bottom.  The lady and giraffe were tall and thin, while the balloon and fish were round and fat.  Together, these stamps could be fit into a rough circle.  Normally, I'm not quite this particular, but the stamps I choose are always meant to be the focus of a piece, and to give my work cohesion.

Note: I usually trim my stamps very close to their exact shape, just so I can do this sort of placement.  If you have mounted stamps or don’t want to trim so close, you can stamp the images on heavy scrap paper, cut them out, and use these to decide your placement.  Just be sure the paper is heavy enough that it won’t curl or keep flying away.

Stamping
It is difficult to match the inks in your pens to the inks in your stamp pads.  Therefore I chose to use a brown ink for stamping, and black ink for drawing. I use Memories dye ink because I know they work with alcohol markers.  Memento is another good inkpad for that purpose.

One by one, I inked and stamped each image.  Then I cleaned the stamps with an alcohol free baby wipe.

Adding Text
Before coloring I measured the area needed for the logo and wording, drew the balloons and added the text.  I hate doing text, lol! 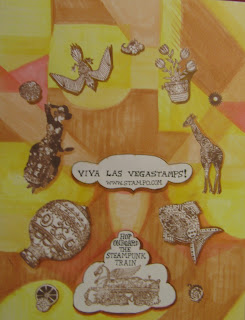 I had a lot going on in this ad, and my personal style tends to be dark and dense.  I used lots of yellow because it is so light and transparent.

I always try to use each color in at least three places.  I like each stamped image to be surrounded by at least two colors.  I also use color to lead the eye.  For example, I used the light tan to roughly color the path that the train tracks would follow.

At this point, I added some shadows around the stamped images.  This improves contrast, and adds a 3D look to the work. 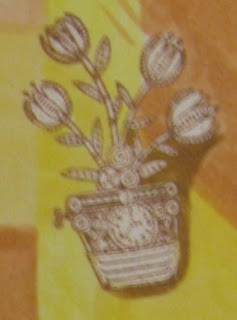 Drawing
What a difference a tangle makes, lol!  I wanted to stay with the 'train' idea, so I created a design pattern--Junction--that I used to draw the eye toward the Viva Las Vegastamp logo.

Then I drew other patterns, designs that I’ve learned to draw, step by step (you’ll see what I mean in the information on Zentangle®).  As with the color, I surrounded each stamped image with at least two patterns.  Each image is also bisected or outlined by a ‘pipe’ in some way.

Because this was a 'Steampunk' themed advertisement, many of the patterns resemble gears or chains.

There is already shadowing within the stamped images, but I picked out some of the darkest areas, and made them even darker with the pen.   This increases the 3D effect, and also ties the images to my drawing.  You could say it both blends and emphasizes, at the same time. 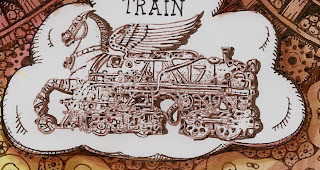 I added some shading within the patterns as I drew them, but my last step was to look for areas that could use more 3D effect or contrast.  One of my weaknesses is knowing when a work is finished.  So I stop when I catch myself looking a second time, or thinking the work needs just a little something more.

Zentangle® and Zentangle®-Inspired Art (ZIA)
The Zentangle® art form and method was created by Rick Roberts and Maria Thomas and is copyrighted. Zentangle® is a registered trademark of Zentangle, Inc. Learn more at zentangle.com.

The first thing I’m going to tell you about Zentangle® is that there are Certified Zentangle® teachers ( CZT®s).  I’m not one of them. A  CZT® can show you how zentangles are done, and answer your specific questions. You can find a list of  CZT®s at the official Zentangle® site.

There is a lot of confusion concerning what a Zentangle® is or isn't, because it is more than one thing.  It is an art form.  It is a teaching method, and it is a method of reaching a meditative state.  If you were going to learn oil painting you might study Impressionism, or Cubism or the methods of the Old Masters.  All very different, but all styles of oil painting.  Zentangle® is a particular style of pattern drawing.

Because Zentangle® has become so popular, many people have adopted some of the techniques, but don't follow the actual method (though some think they do, lol).  These works are commonly called Zentangle®-Inspired Art (also known as ZIA, and I’m going to use that term here on out, for all of our sakes!).  Since I’m not a  CZT® and my work is ZIA, I’m going to focus on that.

The Zentangle® techniques I use for my stamped image ZIAs boils down to this:

I stamp my images.
I color my page (sometime I reverse these steps).
I draw ZIA designs using pattern steps created by myself or that I have found in Zentangle® books or on Zentangle®/ZIA websites and blogs.

Zentangle®/ZIA patterns are broken down into steps.  Usually six steps or less.  That’s what makes my work ZIA—I use pattern steps that others tanglers create, or create pattern steps myself in that style.  Because you may see these terms used on these sites, I’ll define them.

String- the lines/curves used to create sections on a page.
Tangles-the designs that you draw step by step, using pattern steps.
Tangling-the process of drawing a pattern using the steps.

For example, here is the tangle Junction that I created for drawing the train tracks above.  It’s a free form pattern that can even be used as a way to create the sections on your page. 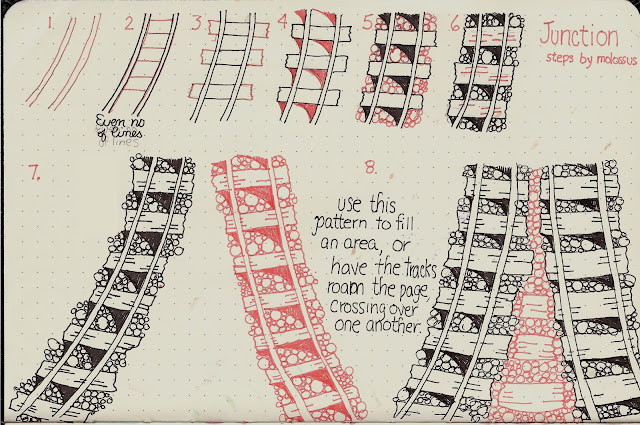 And here is another tangle- Background #1.  It’s a grid-based pattern.  You can vary it but it will always have a similar look. 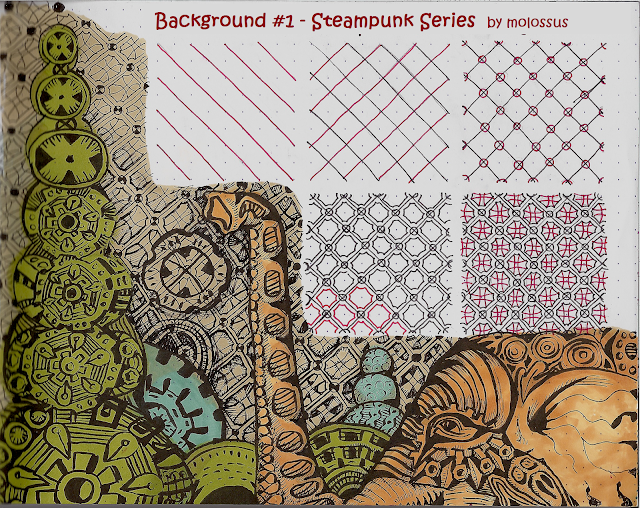 In a nutshell, ZIA work incorporates some aspects of the Zentangle® method but also incorporates other methods or styles and/or realistic images. It is possible to do a drawing that looks like a ZIA, but is actually drawn using other methods.


For your future reference:

Zentangle® Books:
There are an increasing number of zentangle books, and you can find most of them by going to Amazon and typing in 'Zentangle'.  Some of note are:

Zentangle ®  Blogs and Websites: (Just a few of many)
The Official Zentangle® website and blog

Tanglepatterns - biggest site of tangle pattern examples, links and zentangle articles
I Am the Diva - check out her weekly challenges
Beez in the Belfry and ZT for Kidz
Open Seed Arts
Enthusiastic Artist
Tangle Harmony

If you type in Zentangle in the YouTube search box you’ll find other examples.

Non-Zentangle®/ZIA Blog
There are other places to find designs and pattern steps—Cindy Angiel offers many fine Line Weaving patterns at The Rainbow Elephant.

And now-Steampunk
Whole books have been written about Steampunk, so I’m not going to even try to explain all the nuances and splinter groups.

In a similar way, Steampunk isn’t a single thing. For a few it’s a lifestyle, a hobby or expression.  For most it is just a certain look and style.

In the 1980s, it started as a Science Fiction genre that encompassed alternate realities where our current or future world still used steampower and technology dating from the time of Jules Verne.  Hollywood envisions it as a reality where fantastic machines and technology were available during Victorian times –think of the movies The League of Extraordinary Gentlemen or Wild, Wild West or the latest in Sherlock Holmes movies.

Either way, apply that look and feel to crafts.  You have vintage images centered around machines and Victoriana. You have layers and layers of gears and goggles and watch parts and clocks and the bits and pieces associated with early airplanes and old ships and automobiles.  You can make anything Steampunk by adding these kinds of bits and pieces—i.e. the giraffe and flowers stamps used in my advertisement are Steampunk because they are made up of gears and sprockets.  In some cases, it is very difficult to define-The Lady with a Mirror is Steampunk, but it is hard to say why.  Something about the pose and attitude.

I think that is probably enough of an explanation to get you going.  Here are a few links—a Steampunk craft sight, and some articles that explain the whole phenomena in more depth, if you are interested.

Steampunk Articles:
Steampunk Crafts Wiki
Steampunk: What it is, why I came to like it, and why I think it’llstick around.
What is Steampunk? | Steampunk.com
What Is Steampunk? by Garrett Mickley